In doing the Henry Martin Bradley Autobiography reprint and Kickstarter project I have been hearing from some cousins of mine.  Cece Menard Lane and her brother John Menard, 2nd cousins and grandchildren of Lucile Bradley Shepard, wrote me on Thanksgiving saying that they wanted to contribute to the reprint project with checks.  Cece then wrote me a letter saying that she is old enough to remember our great grandfather Edward Luther Bradley and his house at 2229 East 1st street in Duluth.  She said he played the card games “Slap Jack” and “War” for her.

My first cousins tell me that their father, Bruce Burris Bradley, proposed marriage to their mother, Ruth Atkins, in that same house.  I have also heard from 3rd cousin Press Norpell, widow of the former family trustee Tim Norpell.  She has the 1891 family portrait in her house just as I do.  I would love to hear where the other copies of the 13 1/2 by 20 inch, 1891 family portrait ended up.  She also confirmed that she still has one of the two original bound copies of the Autobiography of 1907.

Rumsey Young, also a 3rd cousin, came for a visit and told me the history of the Norpell family.  Carl Norpell who married Adie May Bradley was a lawyer in Ohio and his father emigrated from Germany.  His son Max was also a lawyer and researched and printed the Genealogy update of 1927.  Max’s sister Louise was Rumsey’s grandmother.  Max was the father of Tim who also was a lawyer.

Finally, I have been trying various items with Zazzle such as shirts and mugs using the carte de visite photograph of Henry Martin Bradley that was in the album given to me by my 3rd cousin Ruth Boone.  Her grandmother was Alice Bradley Edwards, the oldest child of Henry.  So I now offer the Henry Martin Bradley 15 ounce coffee mug at $18 postpaid.  All proceeds go to the Autobiography project. 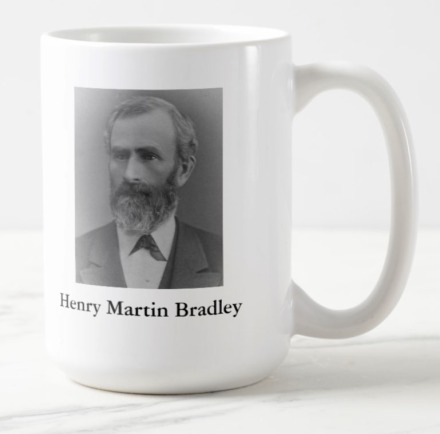 One thought on “New Family Stories from Cousins”