As previously mentioned my great grandmother, Fannie Hoover Burris, was the original genealogist in the family and very active in the DAR.  Her grandfather was John Hoover who lived in the District of Columbia.  When he was 22 years old he fought in the War of 1812 at the Battle of Bladensburg, Maryland on August 24th, 1814.  This was the last battle in defense of Washington DC before the British took the City and burned the White House and Capitol buildings.

He was a private in the 1st Regiment of the DC Militia, serving under Captain John I. Stull’s Company of DC Riflemen.  The Stull position in the battle can be seen on the lower left side of the map below.  The dates of his service according to pension records were June 19, 1814 to July 1, 1814 and August 19, 1814 to October 8, 1814.

John Hoover was born November 10, 1791, married Sarah Meem about 1815 and they had ten children.  After his wife’s death in 1855 he married for a second time to Sarah Franklin.  They lived at 6 M Street North in Georgetown in 1864 and in 1871 they lived at 2527 M Street NW near Rock Creek. This may have actually been the same house but given different addresses by the City when houses were renumbered. The location is now occupied by an office building.

He died on October 7, 1878 leaving his war pension to his widow and he and his two wives are buried next to each other in Oak Hill Cemetery in DC.  The youngest of his children was George W. Hoover who enlisted in the Union Army right after college graduation and was wounded at the Battle of Gaines Mill, Virginia on July 27th, 1862 and died of his wounds on July 1st, 1862. 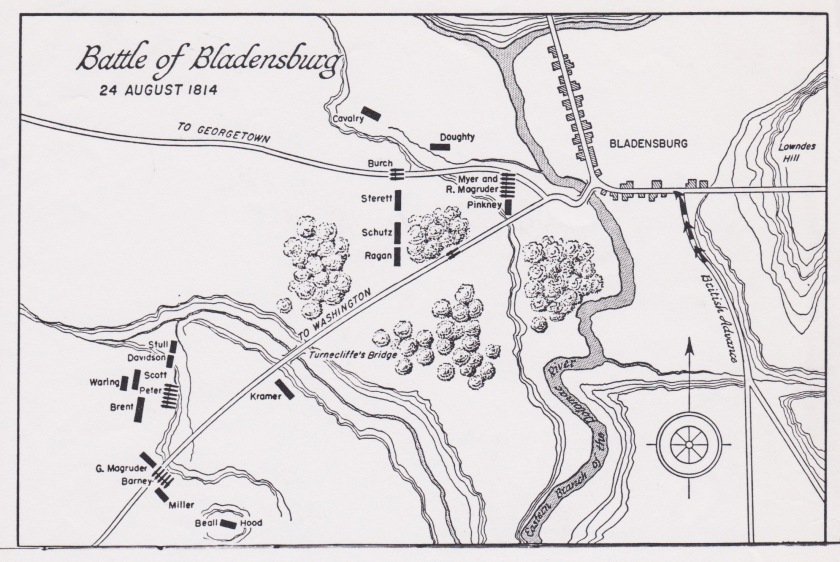 Map from page 116 of the book “The Darkest Day, The Washington – Baltimore Campaign During the War of 1812” by Charles G. Muller from 1963.  See Captain Stull’s position in the lower left of the map where John Hoover fought.

I can now be contacted at: bradleyhistory.com@gmail.com