Among many distinctions, Timothy Matlack (1736 to 1829) penned the original Declaration of Independence which is at the National Archives in Washington, DC. He was a Master Penman and was hired to do deeds, contracts and other legal and historical documents in what could be described as an English Roundhand script. He accomplished this with a feather quill pen. Type fonts that are similar are Copperplate and American Scribe. (See www.oldfonts.com for the excellent computer version of American Scribe)

He was also given the honor of reading the Declaration from the steps of Independence Hall in Philadelphia and overseeing the letterpress printing of the Declaration so that copies could be sent to all of the colonies. He was a very active Quaker and opposed slavery. Congress commissioned the artist Charles Wilson Peale to paint Timothy Matlack’s portrait in 1790. This portrait is shown below as it is in the public domain.

My grandmother, Kathryn Burris Bradley’s genealogy book begins with the Matlack family. This book was originally started by her mother, Fannie Hoover Burris. The first Matlack was William who emigrated from Cropwell Bishop, Nottinghamshire, England aboard the ship “Kent” in 1677 which landed in Burlington, New Jersey.

2. Timothy Matlack married Mary Haines in 1720, Pricilla Matlack was the oldest of 4 children.

His wife Mary died and he remarried a widow, Martha Burr Haines, apparently his sister-in-law. They had 7 children the oldest of which was the famous Timothy Matlack. So he is not our direct ancestor but the half brother of our ancestor Pricilla Matlack.

3. Pricilla Matlack married Isaac Warren in 1739, Jacob Warren was the 2nd of 3 children.

9. Kathryn Stuart Burris married Edward Cook Bradley in 1910, they were my grandparents. My brother was named after Timothy Matlack, but unfortunately my parents got the spelling wrong and so he is Timothy Matlock Bradley, an architect in Hawaii. 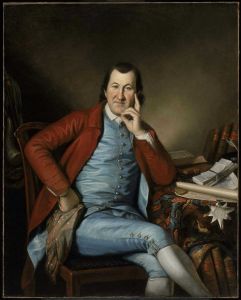 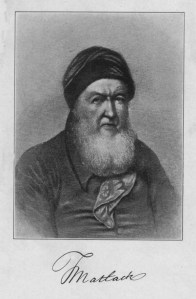