As a follow up to the last blog post, the United States Army was integrated by President Truman after World War II was over. In April of 1941 when the 95th Engineers was formed at Fort Belvoir, Virginia it was military policy to put all of the African American troops together in a regiment led by mostly white officers. My father, Stuart Van Leer Bradley, was one of those white officers and he spent five years with the 95th Engineers. As he got older he told more and more stories of World War II, which included some concerning the unfair treatment of his regiment.

First of all, most of the troops were from the South and they were told that they were training for the deserts of North Africa. Instead, in typical Army SNAFU fashion, the 95th was sent across the country to build the pioneer road of the Alcan Highway (now known as the Alaska Highway) in British Columbia. Dad said that after the first huge snowfall all the trucks were in the ditch because the southern troops did not have experience driving in snow. I researched the 95th at the National Archives in DC and there is a bizarre Army funded study in the file concerning whether black troops could withstand cold temperatures, with the conclusion that they probably could.

When the troops were sent back to New York to board a ship for Great Britain they were told that they would have some leave. So many of the men had their wives and family members come to New York to visit them. At the last minute fearing racial tension their leave was cancelled, and the regiment was ordered to march all night. Dad said that there was a lot of anger at the beginning of the march but after a few hours the men began to sing and the tension broke.

The worst instance of prejudice was at the end of the war in Europe when the 95th was sent to Camp Lucky Strike on the coast of France to be shipped out. The camp was designed for the troops to stay for only 48 hours at the most. Dad and the 95th were kept there for 45 days. My father liked to describe his day there, he got up and lined up for coffee and a donut, then he would get back in line for more coffee and another donut, by that time it was lunch and lunch after the long wait in line consisted of a piece of bread and all the peanut butter you cared to pile on it, and more coffee. For dinner, the same as lunch along with all the brussels sprouts you could eat. He said it was the longest 45 days of his life.

Finally they were shipped out. A few years later my dad was at a U.S. Steel (where he worked) party in Duluth and told the story of Camp Lucky Strike and said that if he ever met the “so and so” that kept them there for 45 days he would punch him in the nose. My dad’s boss said, “you know, that was me”. That he was in charge of assigning the troops to the transport ships that had become available. The problem was, the white troops did not want to share a ship with black troops so he had to wait all that time for a ship that was of the exact size for the 95th. Added to that, of course, was the fact that the war in the Pacific was still going on and he was required to give priority to combat troops before Engineers. Needless to say my dad did not punch his boss in the nose and it was his favorite “amazing coincidence” story.

The three photos below were taken by Stuart V. Bradley: 1. winter conditions on the Alcan Highway in British Columbia 2. the Army Post Office number 998 serving the troops on the Alcan & 3. the rebuilding of a bombed out bridge in France by the 95th Engineers. (click to enlarge each photo) 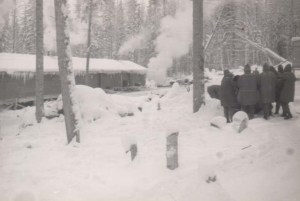 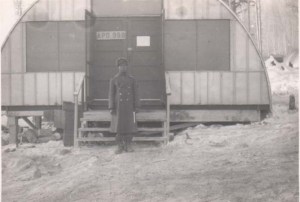 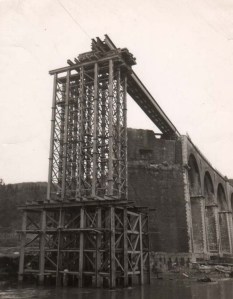